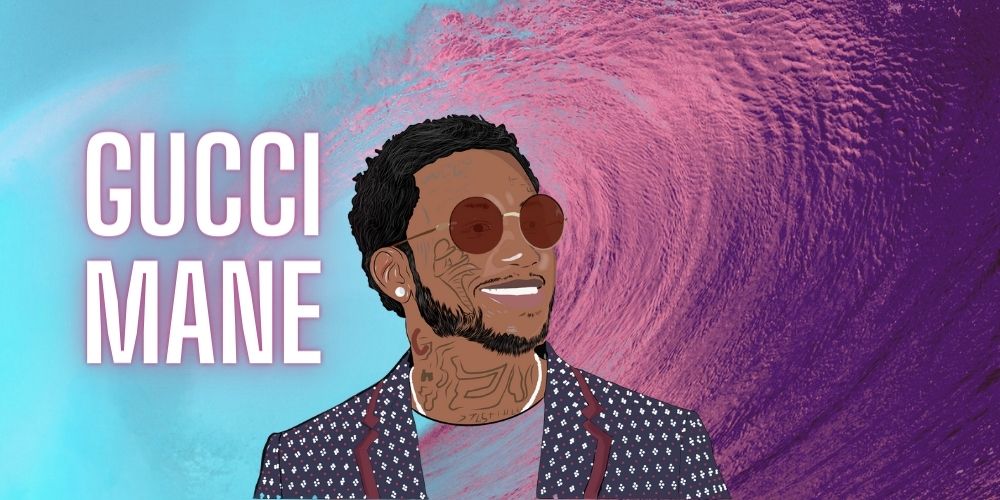 The creator of trap music, Gucci Mane, has had a roller-coaster life story that can get eyeballs rolling for all the music fans. Coming from a military family background, Radric Davis had his share of fame in the music world.

With the billboard hits like Everybody Looking, Radric has proved his mettle in the music industry. Moreover, the recent collaboration with Bruno Mars in Wake up in the Sky broke multiple records with close to 400 Million views and 3.5 Million likes.

In this article, let us explore some of the highs and lows of Gucci Mane. As we learn more about his net worth, we would love to see his source and sink of funds as well!

So, let us start our ride to unravel the life story of a $12 Million worth American rapper.

Gucci, born as Radric Delantic Davis, on February 12, 1980, belonged from the lineage of the military and US servicemen. With his father, and grandparents both working for the US Service, the blood of the warriors flowed deep down.

His mother was a social worker who was also involved in completing her education. As a result, Gucci was looked after by his paternal grandmother.

The first stint of hip hop music for Davis was when his older half-brother brought him to the live concert of Beastie Boys. The share of struggle during Davis’ early childhood is reflected in multiple of his songs.

As he failed to find the right father figure, the nomadic life of Davis took a toll on his childhood as well. It wasn’t until his father found them a place to stay at Knight’s Inn, they had to stay in a make-shift place.

During the early schooling days, Davis found himself engrossed in crimes like dealing with cannabis, thus becoming the drug dealer at an early age. To make ends meet, he used to spend the Christmas earnings, to procure the coke, thus going in the wrong direction.

Stint in the Prison and his love for music..

Davis, though dealing with drugs, never tried it out himself for two years. His first cannabis smoke was with his crush, which ended up turning into a FWB relationship soon.

During his career as a drug dealer, Davis had numerous life-threatening situations. From getting pulled over by thugs to getting his best friend almost killed, Davis had seen it all!

After graduating from McNair High School with the HOPE Scholarship, he enrolled himself in computer programming courses. Later, he was kicked out of the course, wherein he was caught red-handed by an undercover police officer.

Charged under the crime of possession of the drug, he was sent to a 90-day county jail followed by probation.

Writing poems was not new to Davis, since he was doing it since childhood. It was at the tender age of 14 when he started spitting verses. During imprisonment, he decided to take his interest in music to a next level.

Dropping his first single, La Flare with Str8 Records, he could unleash his hidden wish of pursuing a career in music. With an aim to start his own records, he collaborated with numerous artists like Master P, Lil Buddy, and SYS Records.

La Flare records, in collaboration with producer Zaytoven, was the first recording label started by Davis.

But, fate had a little more struggle before Davis geared up for his solo debut album. Before his debut album, Davis dropped hits like White Tee and So Icy, collaborating with other artists.

Is it not a dream come true, when the debut album races to the top 20 in the Hip Hop category of Billboards? This is what Trap House did for Davis.

Ending in the top 20 also brought about issues of sharing rights with Young Jeezy, which strained their relationship for future records.

Eventually, his second studio album that rocked the charts was Hard To Kill. 2006 was the year that saw the hit single Freaky Gurl, which peaked at the 62nd position in Billboard rankings.

Over the years, Davis made his name more stable within the industry. With numerous hits to follow, he amassed enough wealth, to start his own cloth line, Delantic Clothing.

Beyond the Music Industry..

Beyond music, Davis has also published his own autobiography, where he describes his journey of transformation, realization, and spiritual success. Having a small stint on the silver screen as well, Gucci has tried his hands in everything and has been pretty successful.

Owing to his success with numerous artists he collaborated with, he has 12 studio albums under his belt. This incredible feat was instrumental in earning close to $12 Million net worth, till 2021.

Income sources for the $12 Million rapper

Mic’s skills being one of the major sources of earning, Gucci earns profits from the sale of his albums along with the sales of his merchandise. Live performances are an additional source of income. With the ticket costs close to $2000 on average for every live performance, it has certainly helped him gain more wealth.

Mane’s other sources of income include acting and his own clothing line, Delantic Clothing, which houses some of the trendiest hoodies and T-shirts. Royalties from his autobiography are yet another source that helps him get richer every minute.

The growing success of Gucci Mane has just started. As he continues to deliver more hits within the industry, we are expecting his wealth to increase at a galloping pace as well.

Success doesn’t come to those who don’t go through shady lanes. Starting from the streets as a drug dealer to amassing about $12 Million over time, his life teaches us the following things:

1. It is never too late to turn your life around. All you need is solace and introspection.

2. A good writer is always respected. And, good writing always leads to new skills like music and rapping. So, start writing!

3. You can deal with drugs, even without tasting them! This is what we learn when Davis, who himself, did not do drugs, while being the dealer. Thus, if you are doing shady (not recommended), at least don’t harm your own body in the process!

4. Knowing the right people and collaborating with the powerful men, can keep you ahead of your contemporaries.

5. Diversify your business and don’t just stay stuck in one place!

Here are some of the key highlights from Gucci Mane’s life, chronologically arranged:

1. 2017 – Gucci was nominated for 5 BET awards and 3 MTV video music awards, but ended up winning “Best Pop Video – MTV” award for his video song “Down” made in collaboration with fifth harmony.

Gucci Mane has amassed a lot of wealth in a short amount of time. Although he went through shady work he never himself intoxicated drugs. This goes to show that you can stay clean despite working with the dirt. We obviously don’t encourage anybody to do illicit work. Our conclusion is just to show you guys that it’s not necessary for the system to be clean, for you to be clean and you certainly should not do dirty just because everybody else is doing it.

Yes, it’s hard. You might find success later than others, but you’ll bring about a change. You’ll be part of something great. A part of a revolution. Trust us, the world is slowly but surely, moving in that direction.

What do you think about Gucci Mane, his biography, and his net worth?

Let us know in the comments below!