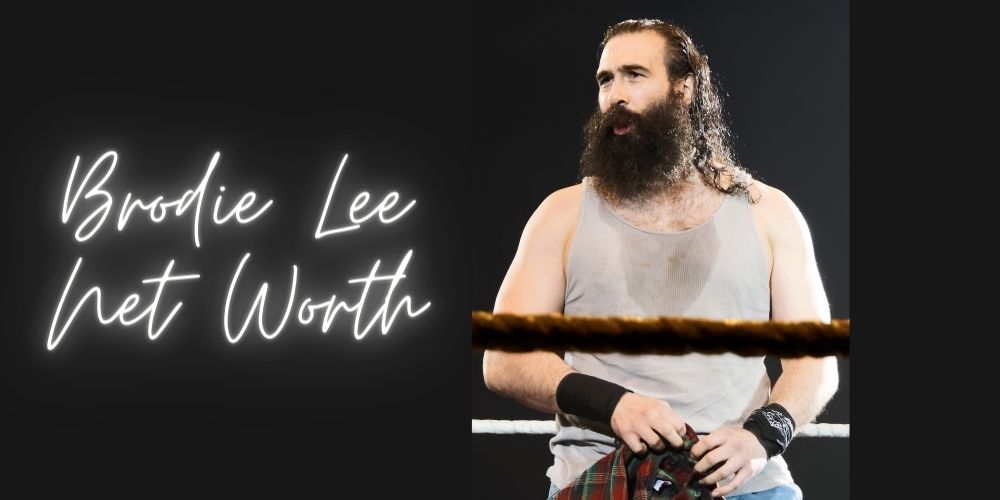 What was Brodie Lee aka Luke Harper’s net worth? Let’s explore the wealth of the late WWE star.

Recently, the wrestling world received the biggest shock with the demise of Brodie Lee. As far as my memory goes right, Brodie Lee was one of the key members of the Wyat Family. Getting the biggest pop as a heel during his stint in the Wyatt Family, the former WWE Intercontinental Champion had a wonderful stint in many of the storylines.

In this article, we shall explore some of the excellent achievements of Lat Brodie Lee. We also look forward to knowing more about the personal life of Brodie Lee and Brodie Lee Net Worth, which might be an interesting read as well!

Born as Jonathan Huber, in New York, Brodie Lee wanted to be closely associated with the sports world from a very young age. Being involved with lacrosse and hockey during his college days.

Making his debut in the year 2003, and being trained by the greats like Rik Matrix, Brodie Lee brought in a lot of grit, determination, and entertainment to the wrestling world.

The 6 ft 5-inch giant, even though had a huge build-up was well known for his agility, special moves, and the excellent balance which he displayed on the ring.

Being a part of the Wyatt family was the biggest highlight for Brodie Lee. During the years 2012-2014, his work along with Bray Wyatt as a heel set the ring on fire. The multiple feuds in the storyline ensured to bring the audience glued to the seats every time the ominous flames of the Wyatt Family struck the arena.

Post his stint in the Wyatt Family, during 2014-15, Luke got onto his major single-handed championship reign, as WWE Intercontinental Champion. Becoming a part of the Team Authority (Storyline), Brodie Lee came into the right books of Triple HHH, thus granting him the title shot against Dolph Ziggler.

2015-17 saw the resurgence of the Wyatt family followed by the Bludgeon Brothers in 2017.

After his stints with the Bludgeon Brothers, it was time for Harper to set goodbye to WWE as his contract ended on December 8.

Brodie Lee has been acclaimed as having a unique wrestling style of agility along with electric moves. With his stature and his build, the athleticism that Huber used to bring into the ring was exceptional.

The agility was used as a deception, along with the power-packed moves, that helped him to gain the attention of the wrestling fans and critics all across the world.

Brodie Lee had featured across many instances away from the wrestling ring. He has been associated with Hollywood through movies like the Damnation and Mohawk.

Moreover, he has also been the recipient of the credits for video games namely the WWE franchise. He is regarded as one of the playable characters in the WWE series.

Brodie Lee first met his wife Amanda in the wrestling arena, in the Independent Circuits. Tying the knot in 2008, both of them have been very closely associated and deeply in love with each other.

Amanda also referred to him as her best friend in the last post which was made post the dreaded demise of Brodie Lee. Both Luke and Amanda have two kids in between them.

Brodie Lee has had multiple sources of income during his life. Not only through professional appearances as a wrestler, but he also drew a hefty amount from numerous endorsements and Hollywood flicks.

The amount which he could garner from Wrestling amounted to $550,000 and together with his wife, his net worth stood close to $3 Million.

Throughout his career, he had earned as much as $10 Million, with the endorsement from the video games earning him close to $100K as a bonus every year.

Apart from the earnings in cash, both of them enjoyed lavish lifestyles with the ownership of multiple properties across places. The value is not yet revealed, but we can safely say that it will boost up their net worth by 10-15%.

The net worth of Brodie Lee & his wife is estimated to be $3 Million, at the time of his death.

Post the shocking demise of Brodie Lee, his wife Amanda has taken to social media to inform the news of the sad demise. She has expressed her grief over the sudden death as well as thanked All Elite Wrestling for the continuous support being provided to their family during the sad time.

She has also clarified that the death had not been due to COVID19, instead, it was a non-COVID-related issue of the lung. Though the real cause of the lung disease has not been disclosed, we would like to keep it that way, understanding the sensitivity of the situation.

What did WWE say about it?

WWE mourned the demise of Brodie Lee and in their message have shown their condolences to his family. Praising his contribution to WWE in the NXT and the Independent Circuit, WWE has given his family complete support.

With the recent news which has gripped the wrestling world with sorrow, there are five key lessons which we can learn from Brodie Lee’s life:

1. Leaving an impact even in the smallest acts can actually make one memorable for a longer time. He was no John Cena, he was no face of the company, yet Brodie Lee’s death seems pretty personal to the wrestling fans. It all goes down to his dedication across all the roles in the storylines that he played.

2. Having a unique style always keeps you ahead and gain the needed attention

Cherishing every moment with the near ones, because death, can be sudden and might not be at the same time as you wish it to be. So cherish every moment to the most!

3. Be well connected within the industry. The demise of Brodie Lee has poured in the wishes and support for his family all across the industry!

4. Always keep moving in life. As Luke was released from the WWE, he did not sit back, instead, he got signed in with AEW and life kept moving.

Hereby, we show our condolences to the entire family of Brodie Lee (Brodie Lee) and show them full support from our end.

What do you think about the net worth and Biography of Brodie Lee?