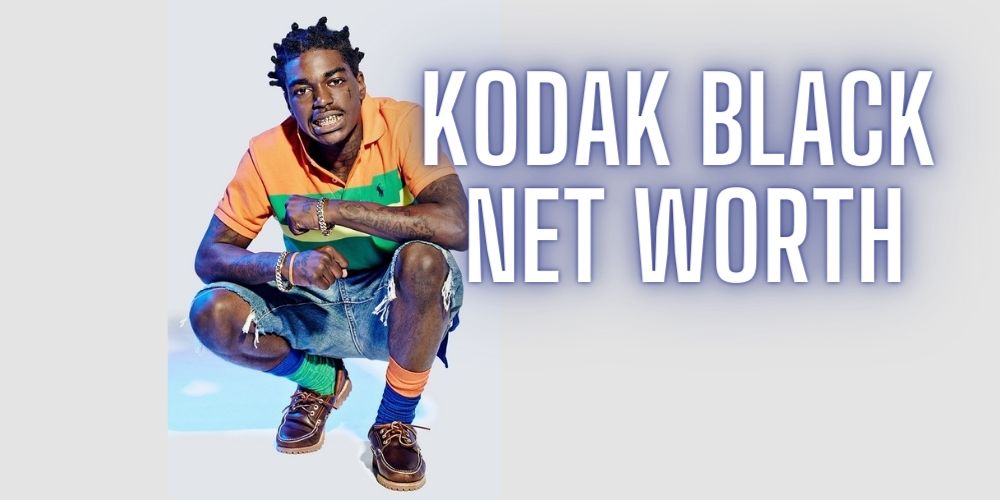 Kodak Black is an American Rapper and songwriter. His most popular songs include “Zeze” & “Tunnel vision”. In 2017, Tunnel vision was included in Billboard hot 100’s top 10 singles. Zeze on the other hand peaked at number 2 in the hot 100 in 2018.

Kodak Black, real name Dieuson Octave was born on June 11, 1997 in Pompano Beach, Florida. He was raised by his mother in a public housing project, Golden Acres because his father left soon after his birth. Black later changed his name to Bill Kahan Kapri.

The music journey started very Early for Kodak. He started rapping when he was in elementary school.

Black went to a local trap house to record music after school. Similar to Eminem, he used to spend time reading thesauruses & dictionaries to enhance his vocabulary.

Although Kodak’s music career started at a young age, his school life was a disaster. He used to get suspended from the school oftentimes and once also got into jail in an auto theft case.

Kodak started getting serious about rapping after he joined Brutal Yungenz, a rap group based near his house. He was just 11 or 12 years old. Some time later he hopped to another group called ‘The Kolyons’.

In December 2013, Kodak released his debut mixtape “Project Baby”. The tape quickly became popular in the local nightclubs and earned him fame. Subsequently he released “Heart of the Projects” in 2014 & “Institution” in 2015.

Kodak came into limelight when Drake posted a video of himself dancing to “Skrt”, one of Kodak Black’s songs on Instagram.

Kodak also signed a deal with Atlantic Records in the same month.

His big break came with the release of “‘Lil B.I.G. Pac”. It was his first mixtape to be featured on Billboard’s charts and helped him gain massive popularity.

The momentum of his popularity skyrocketed in 2017 with the release of his single “Tunnel Vision”. The song was featured in many American Charts and made its way into the Billboard’s Hot 100, peaking at 6th position.

Later that year he released “Project Baby 2” a sequel to his debut mixtape “Project Baby”. Next year valentines, Kodak released “Heartbreak Kodak”, yet another successful album.

Here are some of the key highlights from Kodak’s life:

6. In 2017, one of his songs, “Tunnel Vision” peaked at number 6 on Billboard Hot 100. Kodak also got nominated for MTV Video music awards the same year.

7. Kodak released a successful album “Heartbreak Kodak” in 2018 and got nominated for Grammy Awards.

Here are some of the best quotes by Kodak Black:

2. “Once you start making money, everyone starts becoming your friend.” – Kodak Black

3. “We’re cut from the same cloth, you feel me? We going through the same struggle and all that shit. So, they gonna feel me. And all the other people, they just like what I’m saying, they just like my drive.” – Kodak Black

5. “I have a huge drive. I was born with nothing. So I was always brought up like: go get it. No matter what. Even if it’s scoping and poking. Rapping and trapping. You know, I did it. I switched my whole grind up from doing that, from scoping and poking, to just getting in a booth and just doing my thing.” – Kodak Black

Now that you’ve learnt so much about Kodak Black and his life, it’s time to take a look at the success lessons we can get from him.

1. Start Early: Kodak started making music when he was just 11 years old. Starting early has a lot of benefits including unmatchable experience.

2. Never Give up: Kodak has faced tough times several times in his life but that didn’t keep him from fulfilling his goals. He kept making songs and eventually achieved success & fame.

3. Your past doesn’t necessarily define your future: Like with many other Successful & Rich People, Kodak’s early life was a disaster. If you were to predict his future based on that alone, you’d be wrong for sure.

Considering that Kodak has been actively making songs and earning money since 2013, he could be making $100k – $150k per year in recent years.

If estimates of celebrity net worth are to be believed, then the net worth of Kodak Black is $600 Thousand in 2020.

Kodak Black has found fame and success at an age when most people are still in College.

But if you’re one of them, don’t be discouraged because everyone has a different timeline of achieving success.

That said, we hope this article acts as a provocation and a wake up call to anyone of our readers who are procrastinating. Take action now, life’s too short to procrastinate.

What do you think about the net worth of Kodak Black and his success?