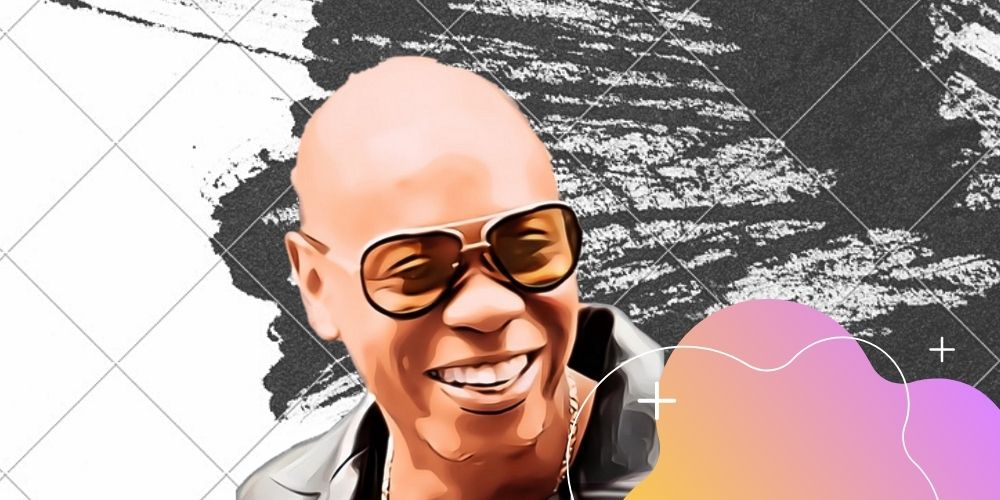 Recently, I was watching one of the episodes of Sticks and Stones where David Chappelle discussed suicide! I appreciated the jest and humor he brought to this sensitive topic.

This is what prompted us to write about the life of David Chappelle. The guy who has made many laugh their hearts out and forget their problems is a living legend.

The world of comedy has got the best contemporary artist in David. With a net worth of over $50 Million, he has surely reaped the benefits of his comic timings.

With quirky punchlines and witty pauses, his career progressed to become one of the most coveted ones, as he was crowned with Grammy awards as well!

Such a successful life, and a blistering career!

Let us delve into his years of growth, struggle, and outstanding success.

Unlike the stories of struggle that every other successful entertainer has, Chappelle’s was quite a lavish life. Being born to professors, he has had a very academic upbringing, with no major flaws.

So, if you were thinking that all you need is a chequered past to make it big, then you are wrong!

During his childhood, Dave used to have the perfect one-liners and strong punchlines. It amused everyone in the room. Those were the early signs of how great comedian Dave was going to become.

Dave’s parents underwent a divorce in his childhood, but ensured that it did not impact their child. He stayed the vacation with his dad, and spent the rest of the time with his mom!

In the year 1991, he graduated from the Duke Ellington School of the Art, wherein he pursued theatre.

NYC and the city of dreams for Dave

Making a name in the comedy circuit was not easy for Dave. He started off with Amateur Night. After a poor reception, he appeared on HBO’s show Def Comedy, which garnered him attention and public exposure.

He was pretty much liked by the jury, thus winning the critical acclaim award. After this, followed a mammoth of public appearances. He started to appear in shows like the David Letterman, Late Night, and Howard Stern Show.

One of the most remarkable hallmarks for his early career was when he opened the show for Aretha Franklin.

Robinhood Men in Tights, and his journey to the silver screen

That was then followed by Chappelle launching his own show, Chappelle’s Show on Comedy Central. It ended up garnering a huge audience base, gaining award nominations, and huge wealth for Chappelle!

Two successful seasons were all it could last. During the third season, Chappelle decided to quit the show midway. He cited the reasons of lack of orientation and overwork as reasons for quitting the show.

This also meant that he had to do away with the $50 Million contracts.

Return of the Stand-up

What followed from 2005 – 2013 was a year of gloom, oblivion, and silence for Chappelle. In 2013, he started with his solo tour, starting with the NYC circuit.

What followed after it was a second innings of success and limelight. Hosting his own show led him to become the host of SNL for the first time.

The eloquent speech, with his biting remarks, ensured to lighten the moods and share the message through his sketch performance. It garnered him an Emmy award for his outstanding performance, which he donated to his alma mater.

What followed next was his venture into the OTT media. With the growing popularity of the OTT channels and the youth tilting towards perfect comedy, it was another right move by Chappelle.

Chappelle signed a deal with Netflix to host three stand-up comedies, for $60 Million. It was one of the heftiest amounts being paid to any comedian.

He earned close to $70 Million over the next two years, which landed him in a better position financially.

His success continued with him winning a Grammy for his comedy album, venturing into movies once again, and growing up in the stand-up arena.

With the Mark Twain prize being the last award that Chappelle received, we can see that he still has a long way to go.

Movies, Stand-ups, direction, and hosting! Isn’t it too much for a guy to do single-handedly? Yet David does it brilliantly!

Earning close to three block-bluster movies, giving him $1 Billion in total, his shares from the movies are yet to be disclosed.

Block Party, which was made on a budget of $3 Million, ended up giving returns of more than 250%. This just goes to show the myriad’s touch which Chappelle has!

Chappelle is married to his Filipina wife Ellaine Mendoza. A proud father of 3 children, he is currently based in Ohio, in a 65 acres farm! He follows Islam, and his wife follows Christianity.

Dave Chappelle is one of the inspirations to those who want to build a career in the domain of comedy. His timing, sense of humor, and sketchy delivery have driven in masses around him.

But, there are certain key learning which we can take from his life! Not only is his life inspiration, but his life also talks about the following passion! And that is exactly what he did!

Now that you’ve known everything about Dave Chappelle’s net worth and his Career, let’s take a look at few key learnings from his life:

1. Follow your heart: He was coming from a background of academicians. If he wanted, he could have simply been a professor in any college and could have lived a life of peace. Yet, he chose his ambitions and talent over complacency. He was ready for the struggle and this is what made him unique.

2. Start your own: When nothing works out, go solo! Start your own way, and make it big! This is what resurrected the stature of Dave in 2013.

3. Never too late to comeback: After a break of close to 10 years, Dave made a comeback to the silver screen. And, his second inning was even better than his first one! Isn’t it exciting?

What do you think about Dave Chappelle and his net worth?