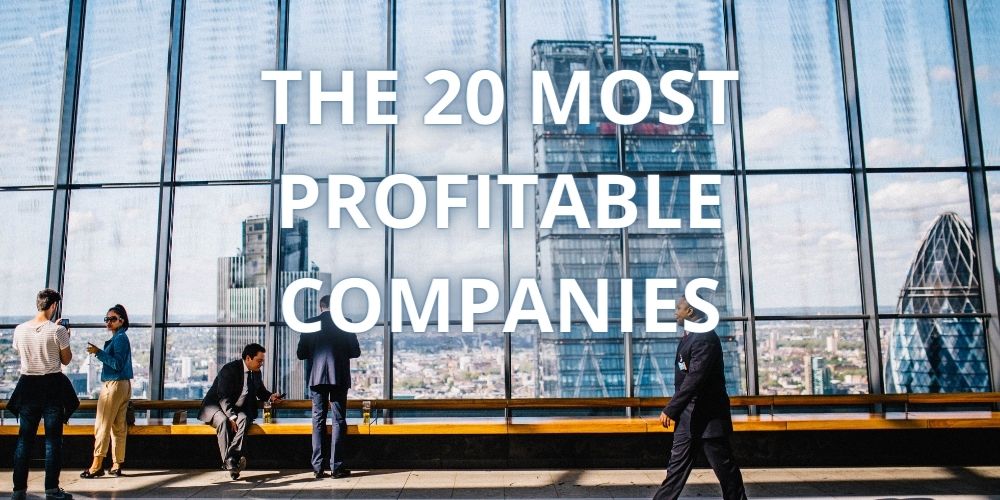 When talking about the biggest companies in the world, we can look at two things: Profit, or Revenue. But, if we look at both, we can get profit margin which is vital for any business’ long term success. I’m not saying that margins are going to be the same for all businesses, but if a company has the highest margins in their industry that’s definitely something to look out for.

In case the product isn’t unique or high quality, the company can’t charge higher prices hence their margins take a hit. That being said, here are the 20 most profitable companies in the world in 2020 and their respective profit margins.

Facebook was founded by Mark Zuckerberg in his Harvard Dormitory.

Gazprom is a giant Russian Petroleum & Natural Gas Company owned by the Government of Russia. It deals in extraction, production, transportation, and sale of Natural Gas. It holds the title of largest Natural Gas producer in the world.

Toyota Motor Corporation was founded by Kiichiro Toyoda, the son of Toyoda Loomworks founder Sakichi Toyoda. Initially their cars were sold by the name of Toyoda (based on the surname of its founder), but it was later changed to Toyota Motor Company in 1937.

Toyota is one of the Biggest car manufacturer (by volume) in the world. It is also the most profitable Automobile company. They’re known for making the most reliable cars.

Verizon is the largest telecom operator in the United States. This year, it has overtaken AT&T in terms of profits and made it’s way to this list. Verizon is also the most profitable Telecommunications company in the world.

Both AT&T and Verizon were once a part of a company called Bell Systems, after the name of its founder. In 1984, that company got split into 7 regional companies also known as the Baby Bells.

Talking about the present day AT&T, 4 out of 7 Baby Bells (through acquisitions) came under SBC and was later renamed AT&T. The present day Verizon on the other hand is a result of merger between two Baby Bells namely Bell Atlantic and NYNEX.

So, technically Verizon is also AT&T, but not presently owned by AT&T.

Citigroup is an American Investment Bank and Financial services corporation. It’s subsidiary, CitiBank is the 3rd largest bank in the United States. It has more than 200 million customers across 160+ countries.

Wells Fargo is one of the big four Banks in America. In 2015, it had surpassed JP Morgan Chase and ICBC to become the most valuable Bank in the world due to its stock price surge. As of 2020, Wells Fargo is the 3rd most profitable American Bank.

Intel is the second largest chip manufacturer in the world after Samsung. Their chips are widely used in Servers, Desktop, and Laptop Computers. They also tried getting into mobile chips market but failed due to high competition from Qualcomm & Samsung, among others.

Alibaba Group Holding is the parent company of Alibaba Group of companies that specialises is e-commerce, cloud computing, among other internet based services. It is analogous to America’s Amazon.com Inc.

Ping an Insurance is a Chinese Health & Life Insurance Company.

The Bank of China is also the 6th most profitable Bank in the world, slightly behind Bank of America.

Bank of America is the 2nd largest American multinational Bank after JP Morgan Chase & Co. It was formed after NationsBank acquired BankAmerica in 1998. The Bank of America focuses towards Commercial Banking, wealth management, and investment Banking.

Google was created with an aim to organise the world’s information and today it is the most widely used search engine with over 90% market share.

It is one of the biggest technology companies in the world.

Microsoft is among the big four tech Giants of the United States. It was founded by Bill Gates & Paul Allen as a company that sold Programming software. Microsoft rose to fame after they started selling Operating Systems.

Industrial and Commercial Bank of China is the largest Bank in the world by Revenue, Profits, Assets, Deposits, Loans, Customers and Employees. Although it was founded in 1984, its growth has kept pace with the Chinese Economy, allowing it to achieve this tremendous feat.

Isn’t it a little strange that the most profitable Companies of China are its Big Banks. What do you think?

Apple is undoubtedly one of the largest and most profitable companies on the planet. For the year 2020, it’s net profit was $55.26 Billion making it second to Berkshire Hathaway in terms of profitability (USA).

iPhone maker and the brainchild of Steve Jobs and Steve Wozniac was founded in a garage to sell Computers. But, over the years it started selling portable music players (iPod), smartphones (iPhone), and tablets (iPad) among other consumer technology gadgets.

They also make money through their apps and services like Final Cut, Logic Pro, Apple music, Apple TV, etc. But it doesn’t end there, they make some more revenue from App store listing fee and a percentage of 3rd party developer’s revenues.

Berkshire Hathaway is the most profitable company in the United States.

Saudi Aramco or the Saudi Arabian Oil Company is the most profitable company in the world. Not just that, it’s also the world’s largest publicly traded company by Market Capitalisation, valued at $1.8 Trillion. It’s profit for the year 2020 is estimated to be $88.21 Billion.

It has access to the 2nd largest oil reserves in the world after Venezuela. In November 2019, the company sold its 1.5% stake to raise about $25 billion in the largest IPO ever.

Here’s a recap of the most profitable companies in the world and their respective profits for 2020 in ascending order:

Some facts about the most profitable companies in the world